Archive for the tag “Angela Merkel”

Is Angela Merkel Still In Charge?

Two things make Chancellor Angela Merkel of Germany look like an exemplary head of government: Donald Trump and Boris Johnson. Measured against the poorest of benchmarks, Ms. Merkel’s chancellorship, even after 14 years in office, appears stable, wise and exemplary. Measured against the leadership Germany and Europe need, it lacks all of the above.

Who Will Succeed Angela Merkel?

When German chancellor Angela Merkel started attending her first international summits, she would mingle with Tony Blair, Jacques Chirac and George W. Bush. All are long gone—but until today Merkel appeared to be the permanent stabilizing fixture in international politics.

It was a moment Germans might call a Katastrophe. No translation needed. At what was supposed to be a simple breakfast meeting, President Donald Trump kicked off this week’s annual NATO summit with a televised tirade belittling Germany as “captive to Russia” over its energy policy and sneering at the country’s military spending levels.

Also Read: Trump’s Feud With Europe Is Worse Than You Think

President Donald Trump said the United States will not sign a joint agreement with other G-7 countries, an abrupt reversal that will further erode relations with key U.S. allies and underscore the country’s increasing isolation under Trump.

With a wayward president at the helm in the United States, the world has become a more dangerous place. In response, though, German Chancellor Angela Merkel is once again steering Germany to the foreign policy sidelines, clearing the way for French President Emmanuel Macron.

Germany Seeks To Pick Up The Pieces

With coalition talks having collapsed, the country and the continent are now wondering what happens next. Blame is being heaped on the FDP, but the party could end up suffering mightily. Germany and Europe, meanwhile, are the biggest losers.

Merkel Lands Fourth Term, But At What Cost?

Angela Merkel will serve as Germany’s chancellor for a fourth term, but Sunday’s win comes at a high price. The right-wing populists are now the third-strongest party in parliament and her negotiations to create a new government are likely to be complicated.

Angela Merkel, The Most Powerful Woman in a World of Unstable Men

Merkel May Be Leading, But Who’s Following? 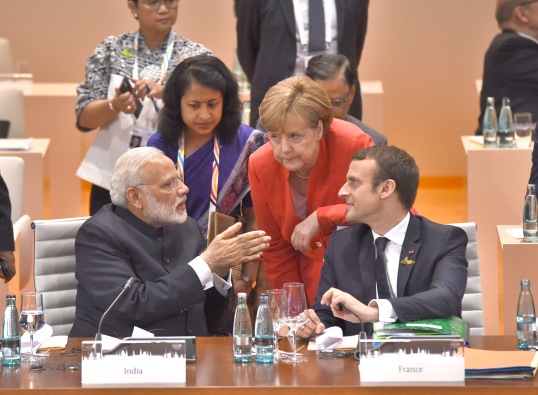 The German chancellor herself has said she is highly skeptical of the leadership role ascribed to her by international media. Merkel’s view is, in fact, shared by her fellow citizens, whose appetite for global leadership remains limited. Berlin’s de facto dominance in Europe notwithstanding, Germans are as reluctant as ever to embrace a prominent international role.

The End of History Is The Birth Of Tragedy

Americans are serial amnesiacs. And today, after more than 70 years of great-power peace and a quarter-century of unrivalled global supremacy, Americans have lost their sense of tragedy. The U.S.-led international order has been so successful, for so long, that Americans have come to take it for granted. They have forgotten what that order is meant to prevent in the first place: the sort of utter breakdown of the international system, the descent into violence and great-power war, that has been all too common throughout human history.

Is Trump Pushing Merkel To Create A German Superpower?

Donald Trump entered office hoping that he could splinter the European Union. But what if his presidency has the effect of further unifying it—against America? German Chancellor Angela Merkel’s announcement that Europe can no longer rely on America as a partner and “must take our destiny into our own hands” marks a turning point.