Archive for the tag “Colombo”

Far from the South China Sea’s unfolding turbulence, the calmer waters of the Indian Ocean are witnessing a more subtle geopolitical power play, in which China is losing its leverage over Sri Lanka to the United States. The shift comes amid a raging domestic debate in the strategically located island nation over the investigation of atrocities committed during the country’s civil war, which ended in 2009.

The Train To Jaffna

The iconic Yal Devi Express from Colombo to Jaffna will resume its run on October 13, some 25 years after the link was suspended during the height of the Sri Lankan civil war.

Bringing Down The Walls

Most concrete walls in Sri Lanka have been demolished in the past four years since the ethnic war ended, but the emotional barricades remain as the country battles its bloody past and tries to make peace with itself. It’s easier said than done.

Disquiet In The Neighbourhood

Manmoahn Singh’s absence at the Commonwealth Summit may not necessarily push the Sri Lankans deeper into the Chinese arms, but it would definitely make it slightly more difficult for New Delhi to do business with Colombo. Given its chaotic neighbourhood, India needs to keep its friends; not turn them into indifferent acquaintances.

In CHOGM Lies Opportunities And Challenges For Sri Lanka

It ought to be remembered that for all the flak Sri Lanka has attracted, CHOGM 2013 presents enormous opportunities, directly flowing from hosting the summit itself and deriving from the international credibility the event can restore to Sri Lanka more generally. The government must take seriously the opportunities that CHOGM brings to the country and its peoples, who have suffered brutally from the three-decade conflict that concluded in May 2009.

Were Prime Minister Manmohan Singh to stay away from the Commonwealth Heads of Government Meeting (CHOGM) summit in Colombo next month, it would not only be perceived as a snub by Sri Lanka but would damage Delhi’s soft-power projection in its own environs and prove deleterious to India’s interests.

Since the end of Sri Lanka’s 26-year civil war in 2009, the government has clearly been focusing on expansion, with new investments in infrastructure and the private sector that are helping to spur growth and contributing to an increase in disposable income and rising consumerism. While this growth is largely positive, there has also been a significant rise in the number of commercial and financial disputes between citizens and institutions as a result.

Let Not Lunacy Become Policy In Case Of Sri Lanka

As a defender of Tamil rights, Karunanidhi is in competition with the state’s Chief Minister Jayalalithaa. She has been proactive on this front, recently ordering a school football team home from Colombo, even going to the extent of suspending a sports official. Under her watch as Chief Minister, ordinary Sri Lankans (including Tamils) have been heckled and harried in Tamil Nadu, and at least two monks have been beaten up in the past few days. This makes for a bizarre situation, with ordinary Sri Lankans being attacked and persecuted for the alleged crimes of their government. It makes a mockery of India’s efforts to sustain a good relationship with Sri Lanka and its people. What if these attacks provoke retaliation in Sri Lanka on the thousands of Indians visiting or living in Colombo and other parts of the island nation? What will Karunanidhi and Jayalalithaa do then? Ask that India snap diplomatic relations with Sri Lanka? Or send in troops to defend Indian citizens?

Solidarity Sri Lanka’s Tamils Can Do Without

If the pressure being brought to bear by the Dravida Munnetra Kazhagam (DMK) and other Tamil political parties and groups on the United Progressive Alliance (UPA) government to take a strong stand against Sri Lanka in the Human Rights Council (HRC) is aimed at helping the Tamil minority in that country, it is unlikely to achieve that objective.

In fact, it is quite likely to have the opposite effect of painting Sri Lankan Tamils as a fifth column for Tamil nationalist or Eelamist designs emanating from Tamil Nadu, and increasing the political polarisation in that country.

From foreign hotel towers sprouting on Colombo‘s seafront to the new motorbikes and mobile phones buzzing in war-ravaged Jaffna, at first glance, Sri Lanka seems to be living up to its claim as Asia’s latest frontier market.

But private businesses are not investing enough, threatening the boom that has swept the island since the end of a long ethnic conflict, while President Mahinda Rajapaksa and his family are tightening their grip on the economy and institutions with what critics see as an unusually personalized system of government.

The global economy may be in poor shape, but with 17 percent growth since the war ended in 2009 and an eye-popping 200 percent rise in the stock market, investors should be flocking to Sri Lanka’s palm-fringed shores. 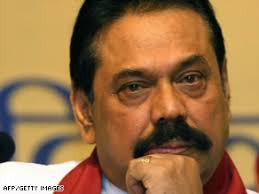