Archive for the tag “Egypt”

The Pandemic Tips The Balance Between Mosque And State

Modern Arab societies such as Egypt and Saudi Arabia have long struggled to reconcile the claims of state and religion. For some autocrats in the Middle East, religion offers a source of legitimacy. But religious authority also competes with state authority and can give courage and structure to opposition movements in these states. COVID-19 has highlighted this conflict by momentarily concentrating state power over religious institutions in the name of public health.

In 1979, Israel and Egypt signed a historic peace treaty, overseen by the United States, which inaugurated diplomatic relations between the two countries and made Egypt the first Arab nation to recognise the State of Israel. Air Sinai, founded in 1982, fulfils a term in the treaty that had to be implemented within three years of signing: the two countries must maintain active civilian aviation routes—meaning there always had to be a direct flight between Israel and Egypt. It just didn’t have to be public.

The U.S. Has Wasted Billions of Dollars On Failed Arab Armies

The United States has spent 70 years and tens of billions of dollars training Arab militaries—with almost nothing to show for all the effort. Time and again, America’s Arab allies have failed to live up to martial expectations. The U.S.-trained Egyptian Armed Forces performed miserably in 1991 during Operation Desert Storm. If anything, they did somewhat better under Soviet tutelage in the 1973 October War. The U.S.-trained Iraqi Army collapsed when attacked by a couple thousand Islamic State zealots in 2014. The U.S.-trained Saudi military fell flat on its face when it intervened in Yemen in 2015, and it has become badly stuck there.

The Rivalry That Shaped Modern Egypt

Seven years since the heady days of early 2011, when massive, electrifying protests brought down the Egyptian dictator Hosni Mubarak, the political atmosphere in Egypt has turned somber. In 2013, General Abdel Fattah el-Sisi overthrew President Mohamed Morsi, a leader of the Muslim Brotherhood who had narrowly won Egypt’s first free presidential election the prior year. Since seizing power, Sisi has emptied the country of any real politics.

A Brief Global History Of A Tactic That’s Back In Style: Toppling Other Countries’ Governments

More sensible strategists might have first considered whether this goal even makes sense. What does history teach us? Did previous efforts at regime change (by the United States and by others) produce the expected benefits, or did they end up making things worse? Does regime change produce real benefits at relatively low cost, or is the price tag usually much higher than expected, while the benefits tend to be disappointing?

The role of a dominant actor in an informal security alliance is to offer leadership and security aid to junior parties. To fulfill its role, Saudi Arabia needs financial resources and a committed group of leaders at home who are willing to build the alliance’s security architecture and provide additional benefits—including aid and military hardware—to those who volunteer to join. And on those terms, Saudi Arabia has yet to demonstrate to its partners that it is up to the task.

The Israelis and Turks, the Egyptians and Jordanians –– they’re all beating a path to the Kremlin in the hope that Vladimir Putin, the new master of the Middle East, can secure their interests and fix their problems. The latest in line is Saudi King Salman, who on Wednesday is due to become the first monarch of the oil-rich kingdom to visit Moscow. At the top of his agenda will be reining in Iran, a close Russian ally seen as a deadly foe by most Gulf Arab states.

It has been more than six years since the start of the Arab Spring, and life for most Arabs is worse than it was in 2011. Unemployment is rife in the Middle East and North Africa, where two thirds of the population is between the ages of 15 and 29. And throughout the region, regimes have closed off channels for political expression, and responded to popular protests with increasing brutality. The governments of Egypt, Saudi Arabia, and, to some extent, Morocco, epitomise Arab regimes’ seeming inability to escape the autocracy trap – even as current circumstances suggest that another popular awakening is imminent. 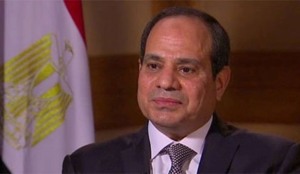 As a key U.S. ally in the Middle East, Egypt has played an integral role in helping to combat the region’s terrorist threat, particularly since Egyptian President Abdel Fatah el-Sisi came to power in June 2014. However, Egypt is facing a daunting terrorist challenge of its own, primarily in the lawless Sinai Peninsula where ISIS’ Sinai affiliate and other militant groups roam freely and execute frequent attacks against Egyptian military and security personnel.

An old field telephone from the 1940s, a Nazi flag and a map of Tobruk greet visitors to the newly reopened Rommel Cave Museum in Marsa Matrouh, one of Egypt’s lesser known tourist destinations. The items belonged to Erwin Rommel, one of the most celebrated generals of Nazi Germany until he was implicated in a plot to kill the Fuhrer in 1944. Rommel has long been remembered as one of the few “decent” Nazi commanders, though there is debate over his legacy of chivalry.