Archive for the tag “GCC”

Another turbulent year in the Middle East has drawn to a close, but there will be no respite in 2018 from the regional chaos that is underpinned by the inflamed rivalry of Saudi Arabia and Iran. The young crown prince Mohammed bin Salman has consolidated power, embarking on an unprecedented cultural revolution and economic reforms in Riyadh, but his foreign policy ambitions have yet to bear fruit. Instead they will continue to sap lives and resources in neighbouring Yemen, the Arab world’s poorest country, unless a political settlement is reached.

GCC Summit Cut Short By A Day Amid Diplomatic Rift

A key regional summit of the six-nation Gulf Cooperation Council (GCC) countries has been cut short and will conclude on Tuesday instead of Wednesday, with all the delegates leaving Kuwait after a closed session. The Kuwait summit takes place exactly six months after three of the member states severed diplomatic and trade ties with Qatar.

Will The GCC Summit Resolve The Ongoing Crisis?

It remains unclear whether the upcoming Gulf Cooperation Council summit in Kuwait will have any positive effect on the ongoing fractures between Qatar and a number of Gulf states, analysts say, as the regional body gears into a symbolic rather than functional role.

Also Read: What Is The GCC

With No End In Sight, Gulf Blockade Nudges Qatar Closer To Iran

Nearly five months on, the “crisis” between Qatar and a coalition of nine countries led by Saudi Arabia and the United Arab Emirates has reached a relatively stable equilibrium. The countries’ resultant blockade of Qatar – over its alleged support for terrorist groups and ties to Iran – has not significantly changed Doha’s behaviour according to Qatar’s detractors, but rather has pushed it closer to Tehran.

The role of a dominant actor in an informal security alliance is to offer leadership and security aid to junior parties. To fulfill its role, Saudi Arabia needs financial resources and a committed group of leaders at home who are willing to build the alliance’s security architecture and provide additional benefits—including aid and military hardware—to those who volunteer to join. And on those terms, Saudi Arabia has yet to demonstrate to its partners that it is up to the task.

If You’re Wondering Why Saudi Arabia And Israel Have United Against Al-Jazeera, Here’s The Answer

When Qatar’s Al Jazeera satellite channel has both the Saudis and the Israelis demanding its closure, it must be doing something right. To bring Saudi head-choppers and Israeli occupiers into alliance is, after all, something of an achievement. But don’t get too romantic about this. When the wealthiest Saudis fall ill, they have been known to fly into Tel Aviv on their private jets for treatment in Israel’s finest hospitals. And when Saudi and Israeli fighter-bombers take to the air, you can be sure they’re going to bomb Shiites – in Yemen or Syria respectively – rather than Sunnis.

The US Balance-of-Power Strategy In The Gulf Is Collapsing. But It Never Had A Chance Anyway

The ongoing dispute between Qatar and the rest of Arab Gulf Cooperation Council represents perhaps the greatest internal threat to the group since it was created as a bulwark against Shi’a radicalism in the aftermath of the 1979 Iranian revolution. The split all but eliminates any prospect that the United States could forge a regional – let alone an international – coalition to contain and roll back what many consider Iran’s growing regional clout.

A Cold War Turning Hot In The Middle East

The Cold War in the Middle East between Saudi Arabia and Iran is coming to a head. So far carried out with the help of proxies in Syria, Iraq, Yemen and elsewhere, it’s in danger of turning into a military confrontation between the two regional powers.

The Qatar crisis proves two things: the continued infantilisation of the Arab states, and the total collapse of the Sunni Muslim unity supposedly created by Donald Trump’s preposterous attendance at the Saudi summit two weeks ago.

Duration of Diplomatic Dispute is Key to Qatar Impact 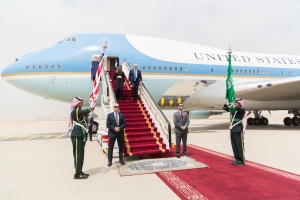 Behind the bluster, bombast, tweetstorms, and general atmosphere of comic opera, is the Trump administration reverting to the successful Middle East grand strategy that both Democratic and Republican presidents followed during the Cold War?