Archive for the tag “Islamism”

Can Macron Stem The Tide Of Islamism In France?

Just over a week ago, Emanuel Macron said he wanted to end ‘Islamic separatism’ in France because a minority of the country’s estimated six million Muslims risk forming a ‘counter-society’. On Friday, we saw yet another example of this when a  history teacher was decapitated in the street on his way home in a Paris suburb.

Is the Muslim Brotherhood dying? In Egypt and throughout the Arab world, Brotherhood-affiliated parties are suffering an unprecedented series of setbacks that cast real doubt on the long-term viability of that version of Islamist politics. 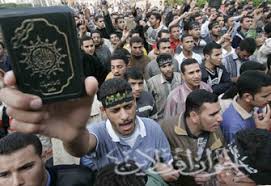 Riyadh was a close ally of Egypt’s former leader Hosni Mubarak, toppled by a popular uprising in 2011 that brought Mursi‘s Muslim Brotherhood to power, and has long feared the spread of the Islamist group’s ideology to the Gulf monarchies.

Fresh Quest For Change In Kuwait

With greater representation to Kuwaiti society, the new parliament brings with it the hope that somehow the resiliency of the political system has finally kicked in and is steering the country in the right direction

The ouster of Morsi is only one episode in the long tradition of African state coups. Yet, it contributes to a trend that threatens the blossoming of democracy across the region.

As Egypt’s political crisis rolls on and a transitional government tries to steer a path different from that taken by ousted President Mohamed Morsi, the country’s spiraling economy is at the top of the agenda

For the Muslim Brotherhood to play a constructive role in Egypt’s rebirth, it will have to opt for cooperation. Here’s why it might.

The rejection by Egyptians of their Islamist government marks a turning point — not only for that country, but for the entire Middle East. Over the course of the past couple weeks, the Egyptian people have made a clear and powerful statement that political Islam cannot and should not be allowed to suppress the broader popular will for moderation and tolerance.

For Egyptian Army It’s A Choice Between Turkey and Algeria

Two groups of people — The Muslim Brotherhood and the military — will determine Egypt’s future and it is important understand which direction events could go, writes Omar Ashour