Archive for the tag “South Korea”

The Biggest Winner Of the Japan-South Korea Dispute? China

South Korea’s decision to end an intelligence-sharing agreement with Japan, part of a widening rift between the two U.S. allies, has the Pentagon on edge — and not just because it arrives amid stalled efforts to persuade North Korea to denuclearize. “China is the biggest winner here,” said Rob Spalding, a former senior official on President Trump’s National Security Council. 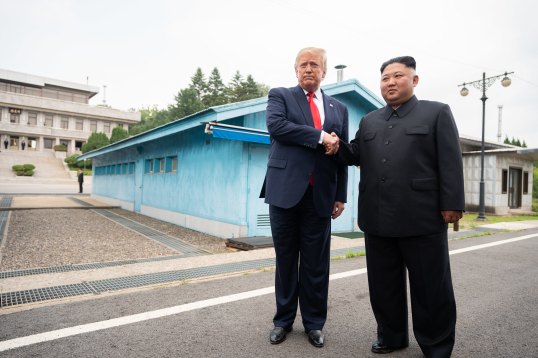 U.S. President Donald Trump became the first sitting U.S. president to set foot in North Korea on Sunday when he met its leader, Kim Jong Un, in the Demilitarised Zone (DMZ) between the two Koreas and agreed to resume stalled nuclear talks.

The historic summit between U.S. President Donald Trump and North Korean leader Kim Jong Un ended with the celebratory signing of a declaration that the United States and North Korea will “work toward complete denuclearization of the Korean Peninsula.” But the declaration, which echoes the vague language of an April joint statement by Kim and South Korean President Moon Jae-in, does not commit North Korea to a firm, verifiable process for giving up its nuclear weapons or the associated research-and-development effort.

It is all systems go in Singapore as the country readies itself for the arrival of United States President Donald Trump and North Korean leader Kim Jong-un ahead of their highly anticipated summit in the Lion City. The two leaders are expected to touch down on Sunday, giving them a full day to prepare for Tuesday’s summit.

Kim, The Economy And Why UN Sanctions Did Not Bring North Korea To The Summit Table

If top officials in Washington and Tokyo are to be believed, the application of “maximum pressure” through United Nations sanctions was decisive in bringing North Korean leader Kim Jong-un to the summit table.  Pyongyang has been the target of a string of UN bans from trade to travel for more than a decade, the toughest coming in September when they were expanded to cover crude oil. Just six months later Kim sent a message offering to meet US President Donald Trump with no strings attached.

U.S. President Donald Trump said he will meet North Korean leader Kim Jong Un on June 12 in Singapore, locking in a historic summit between the two leaders amid their confrontation over Pyongyang’s nuclear weapons program. “We will both try to make it a very special moment for World Peace!” Trump said in a Twitter message announcing the date and place of the long-anticipated talks.

Kim Jong-un has made a second surprise visit to China, in another sign of warming ties between the two communist states just weeks ahead of Kim’s planned meeting with the US President Donald Trump. The visit, the first time he is known to have travelled by plane as leader, was his second visit to China in the space of just over a month.

Chinese President Xi Jinping’s “informal” summit meeting with Indian Prime Minister Narendra Modi in the central Chinese city of Wuhan, significantly, began on the same day as the inter-Korean summit on April 27. That Xi chose the same date for the two-day summit might not have been a mere coincidence, given that the historic meeting between the leaders of North and South Korea left China on the sidelines, with little influence over those proceedings.

In the abstract, a peace deal to replace the armistice that halted the Korean War makes eminent sense. Why not draw to a close a conflict that has unnaturally divided Korea and perpetuated one of the most militarized and volatile stalemates on earth? When leaders of North Korean, Chinese, and U.S.-led United Nations forces signed the 1953 truce, they agreed to hold another conference in three months to ensure “the peaceful settlement of the Korean question.” A resolution is a long time coming.

Trump Is Not Nixon and North Korea Is Not China

Trump’s willingness to meet with North Korea’s dictator is not really comparable to the opening of relations between the U.S. and China. The latter was far more important strategically and economically for both countries. What’s more, the geopolitical conditions that drove China to go to Nixon were entirely different from those today for the grandson of the “Great Leader” in Pyongyang.