Archive for the tag “Stalin”

Xi Jinping Is Not Stalin

The Cold War lasted 40 years. For most of that period, victory was uncertain. For Washington to be successful in what may be an even longer contest, it must diagnose the severity of the threat precisely and calibrate efforts to contain and deter Beijing accordingly. False analogies from the Cold War hurt both of these efforts.

The Jokes Always Saved Us: Humour In The Time Of Stalin

Stalinism. The word conjures dozens of associations, and ‘funny’ isn’t usually one of them. The ‘S-word’ is now synonymous with brutal and all-encompassing state control that left no room for laughter or any form of dissent. And yet, countless diaries, memoirs and even the state’s own archives reveal that people continued to crack jokes about the often terrible lives they were forced to live in the shadow of the Gulag.

Collecting intelligence for someone who doesn’t want it is at best a waste of money, and at worst a prescription for disaster. Again, the Soviet example is a good one. In the lead-up to the second World War, and repeatedly during the war years, the Soviet Union squandered intelligence from the best spy network ever. Perhaps the biggest geo-strategic blunder in history was the Soviet failure to anticipate Operation Barbarossa, the 1941 Nazi invasion which almost led to the annihilation of the Soviet state.

A Tsar Is Born

Seventeen years after Vladimir Putin first became president, his grip on Russia is stronger than ever. The West, which still sees Russia in post-Soviet terms, sometimes ranks him as his country’s most powerful leader since Stalin. Russians are increasingly looking to an earlier period of history. Both liberal reformers and conservative traditionalists in Moscow are talking about Mr Putin as a 21st-century tsar.

The most striking thing about the building was, and is, its history. In the nineteen-thirties, during Stalin’s purges, the House of Government earned the ghoulish reputation of having the highest per-capita number of arrests and executions of any apartment building in Moscow. No other address in the city offers such a compelling portal into the world of Soviet-era bureaucratic privilege, and the horror and murder to which this privilege often led.

The build-up to this year’s Victory Day celebration has coincided with a Stalinist renaissance of sorts. Against the backdrop of the crisis in neighboring Ukraine, a state-sponsored effort to fan patriotic sentiment in Russia has brought about a reassessment of the dictator’s contribution to its history. In Moscow, bookshops are filled with volumes casting a positive light on Stalin’s policies, and new museums praising his legacy are scheduled to open in time for May 9. 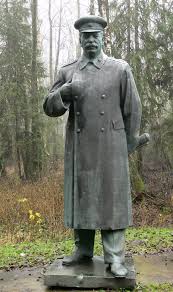 The collection’s story begins in the 1920s, when the Bolsheviks turned what was once the Rumyantsev arts museum  into the country’s national library. As the newly anointed Lenin Library began amassing new literature, it also opened a rare book department to house compromising materials, acquired primarily from confiscated noble libraries.

Russia’s ruling regime is persisting in its attempts to rehabilitate the name of Joseph Stalin. For Vladimir Putin, this has been a consistent course—from the reinstated melody of Stalin’s national anthem to new school textbooks justifying Stalin’s mass purges as “adequate to the task of modernization.” In 2010, as Russia marked the 65th anniversary of victory in the Second World War, the authorities attempted to “decorate” the streets of Moscow with portraits of the dictator—but were forced to back down in the face of strong opposition from veterans, civil society groups, and the Russian Orthodox Church.