2021 Is The Year The Internet Gets Rewritten

Big Tech’s post-insurrection backlash against U.S. President Donald Trump and the right-wing online incitement machine were unprecedented… There are three conclusions to draw about this whiplash reaction. First, Big Tech’s raw power to redirect online discourse. Second, the opacity, capriciousness and inconstancy with which they wield that power. Third, that Big Tech companies—some of the world’s most astute political actors—are nervous that the rules governing internet capitalism are about to drastically change.

Big Tech companies do own their respective platforms. They have the right to devise terms of service and standards. Those are decided unilaterally, even if some companies undertake an elaborate exercise of consulting affected stakeholders. But their actions do not follow due process, and they rarely explain their decisions clearly.

For the first time in his tweet-driven presidency, Trump wasn’t able to employ his preferred method of communication to stoke or incite supporters. He wasn’t able to launch at leaders of his party his usual mob-boss loyalty tests. And he wasn’t able to distract and divert and defend himself in the telltale ways to which Americans have grown so accustomed.

Can Twitter Stop Trump From Running Away With The Election? 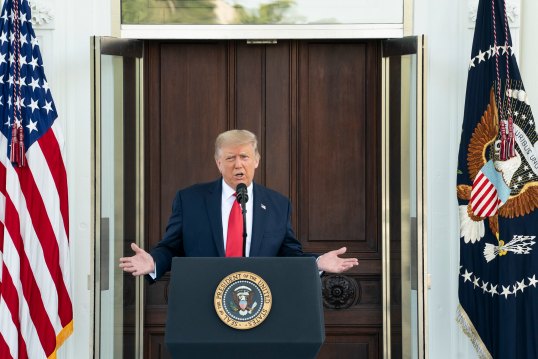 A growing fear heading into election night is that prolific tweeter Donald Trump might declare victory over Joe Biden even as mail-in votes are still being counted—and that others could spread misinformation about the results. On Thursday, Twitter announced sweeping policy changes in an attempt to remove or label any tweets containing inaccurate information regarding the upcoming election.

There Can Be No Compromise In The Trump Vs. Twitter Beef

If ever there was a thought that the social networks could finesse their way through the question of whether and when to block hateful, damaging content, that has now been extinguished. Trump’s online presence has led to its demise. To act, or not to act, is to pick a side in a political battle.

In The Coronavirus Era, The Force Is Still With Jack Dorsey

For the past four and a half years, Jack Dorsey has been living his best life. While the 43-year-old multibillionaire is one of the only CEOs on the S&P 500 who oversees two public companies, Twitter and Square, with more than 8,000 employees, and is an angel investor or adviser to start-ups, until coronavirus recently obliterated the global economy, he might have been one of the least stressed-out people in America.

Also Read: Twitter Takes A First Stand Against Some Trump Tweets — But Ignores Most Others

Chinese diplomats are taking an increasingly strident tone on US President Donald Trump’s favourite battleground Twitter, as Beijing works to shift the narrative away from its handling of the coronavirus outbreak, which was first reported in central China last year.

Zuckerberg at Facebook, Sundar Pichai at Google, at its parent company Alphabet, Larry Page and Sergey Brin, Brin’s ex-sister-in-law, Susan Wojcicki at YouTube and Jack Dorsey at Twitter. The Silicon Six — all billionaires, all Americans — who care more about boosting their share price than about protecting democracy. This is ideological imperialism — six unelected individuals in Silicon Valley imposing their vision on the rest of the world, unaccountable to any government and acting like they’re above the reach of law. It’s like we’re living in the Roman Empire, and Mark Zuckerberg is Caesar. At least that would explain his haircut.

Read Here – The Times of Israel

At Twitter, It Seems No One Can Hear The Screams

Since its founding, Twitter’s MO has been growth: more tweets, more users, more numbers its shareholders will drool over. And that’s put Twitter in a bit of a pickle. The things that drive the most engagement—controversy and chaos, not kindness and civility—are the things that have come to define Twitter. It is the platform of rage, of virality, of @realDonaldTrump. It is not the platform of, say, relaxing after a hard day at work.

Mr Jack Dorsey might have his political views and Mr Donald Trump might have many twigs to pick with Twitter, but there should not be any argument over who’s the best ambassador and brand builder for the social media platform.